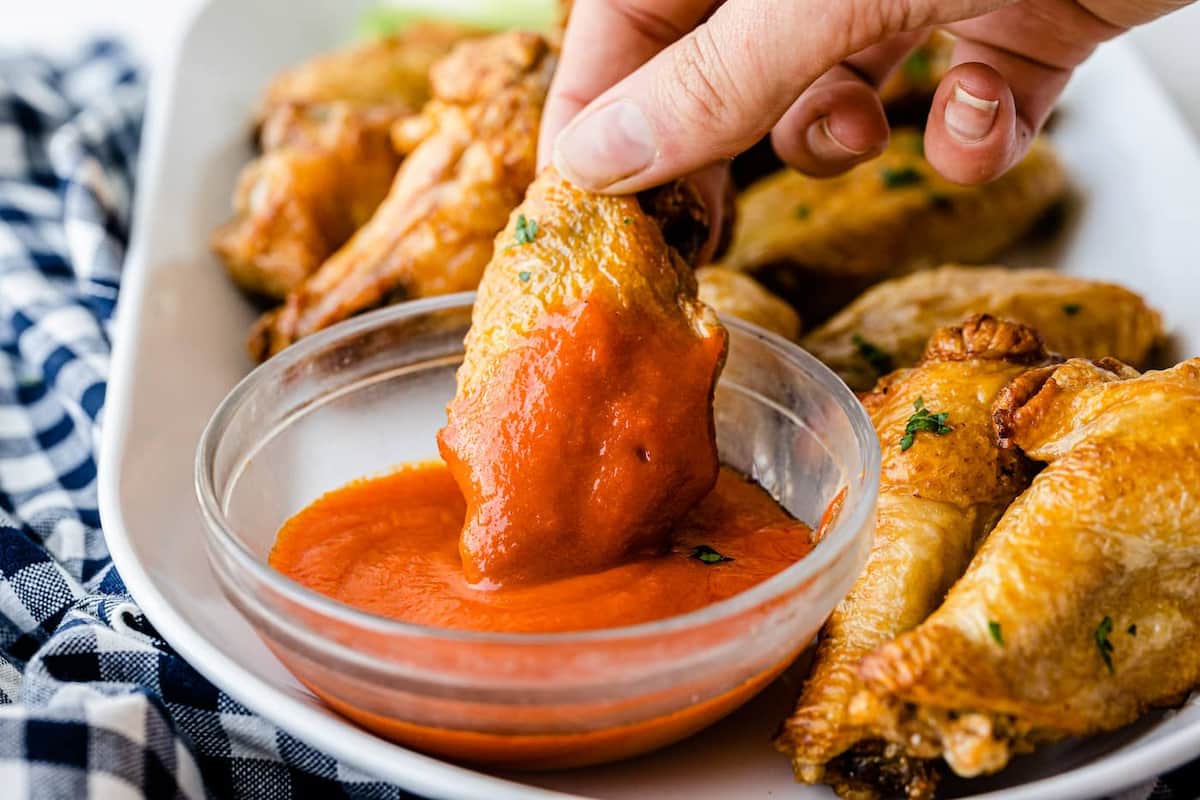 How To Cook Frozen Chicken Wings In Air Fryer?

Here, we’ll go over cooking frozen chicken wings in air fryer, baking chicken wings, and a basic recipe for either of the methods.

Is Air Frying Any Good? 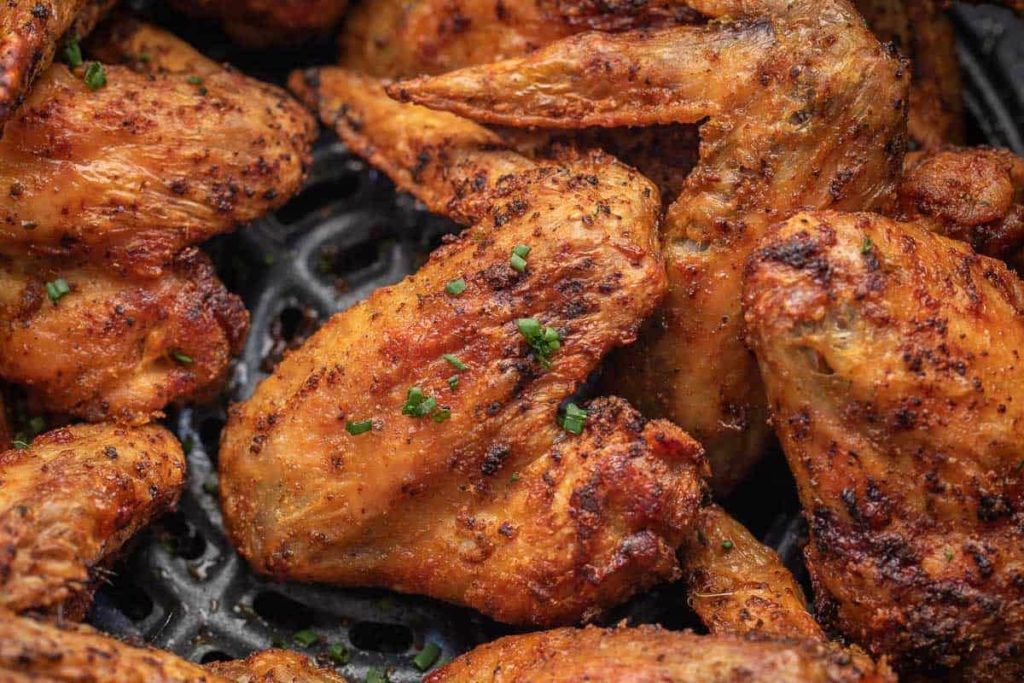 Pretty much everyone knows about deep frying chicken, but doing it to straight-up frozen chicken wings isn’t the best.

The next option is to use an oven which does work but it takes a good amount of preparation time and there are also quite a lot of things to clean up afterward. So that leaves us with air frying as the final option that can still work with frozen chicken wings, but what does it do that’s fine and also easier to clean up after?

Well, an easy way to explain it quickly is that it’s like an unusual convection oven, as the method of heating and spreading the heat is quite similar. But there is a key difference, and that difference is also how an air fryer emulates deep frying to an extent. The way it works is the food you wish to fry is put on a tray, then a fan near the heating will blow air directly at the food really quickly. This is how the air fryer can “fry” the outside of food so well making it seem like it had been deep-fried.

On top of that, as it uses air and the speed of the air to do the cooking it uses significantly less oil than deep frying and still quite a bit less when compared to a traditional oven. The speed of the cooking is also quite astounding as it is quicker than a regular oven, it is a bit different when it comes to the texture though. Since the way it gets crispy is a bit different from purely oil and heat, since the wind is speeding it up it changes a bit and you may or may not like that crispiness as much.

How To Cook Frozen Chicken Wings? 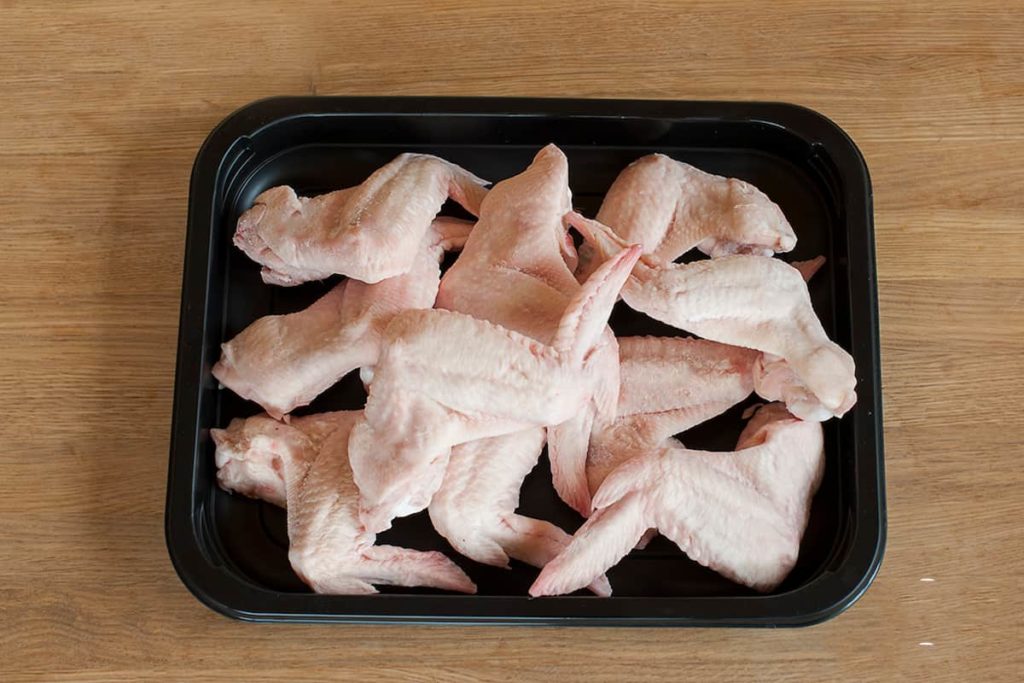 Next, you might want to season them if you plan to use them shortly, if not just store them with the rest of the meat in the freezer. Now for the next step in how to cook frozen chicken wings, you’ll want to cover them in a light layer of oil for either of the methods we’ll go more in-depth on, this will ensure that the skin crisps up smoothly. 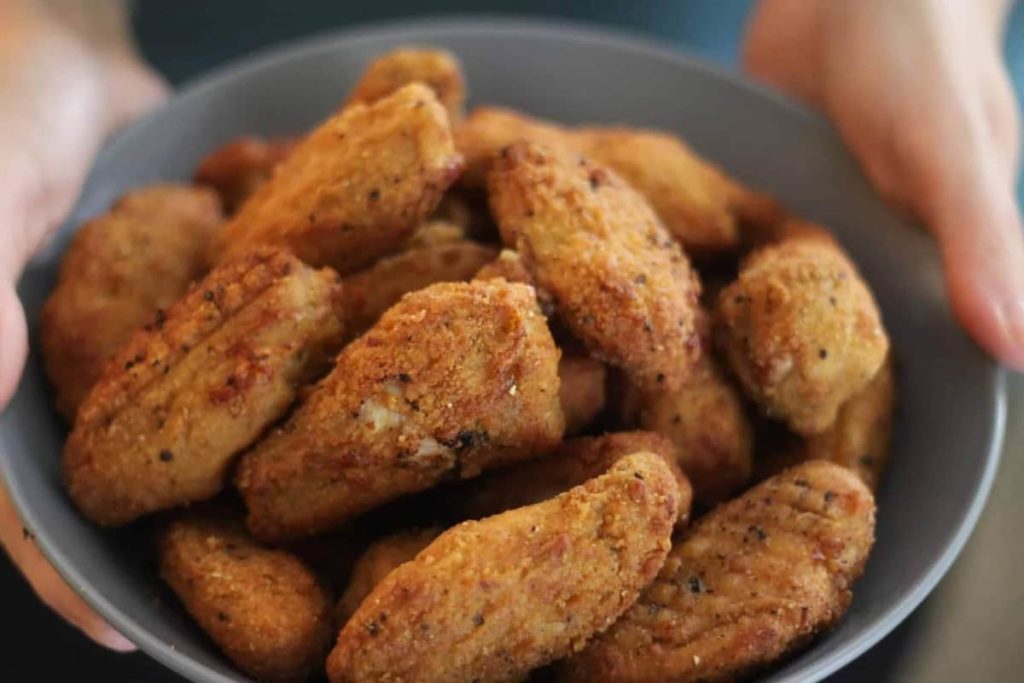 When it comes to frozen chicken wings in air fryer, there are several reasons why you would choose such.

One is since the air fryer has a constant strong gust of hot wind to cook the frozen chicken wings in air fryer, you can expect an evenly cooked exterior that WILL be crispy. This is because the wind actually affects all food this way, so that’s why it needs so little oil to get food crispy as it’s mostly the hot wind doing it.

Next is how fast it is. You pretty much just pop them in and turn it on to the desired heat, no need for any pre-heating. A general rule of thumb for either raw or pre-cooked wings is to space them out so all the frozen chicken wings in air fryer lay flat and none of them stack.

Finally, if cooking multiple batches you’ll want to give less time to the later batches as the time allotted in the recipes are based on a batch of frozen chicken wings in air fryer that’s completely cool and off.

Let’s find out how to cook frozen chicken wings in air fryer if they’re uncooked or pre-cooked.

Air fry for about 18-30 minutes, based on the thickness of the wings, at 400°F/205°C. Every few minutes, be sure to check and flip the frozen chicken wings in air fryer to cook both sides evenly.

Once the wings have been cooking for 18 minutes, take out the thickest piece and cut into it to check if it is raw. If still raw, place the frozen chicken wings in air fryer and cook at the same temperature for a few more minutes then check again.

Once you are sure that the chicken wings are cooked, you can then put a sauce, and there you have it, the best frozen chicken wings out of an air fryer!

Now for pre-cooked frozen chicken wings, do the same, take out of the freezer, and season. Next is to place them in the air fryer basket and keep them unstacked. And this time set the air fryer to 380°F/193°C again for 18-30 minutes depending on the thickness.

Both of these are also possible with any other part so it doesn’t only have to be frozen chicken wings in air fryer, it can have other larger parts as well. Keep in mind though that any larger part of the chicken will naturally need a longer time to cook. Our recommendation is to add about 5 minutes to what you’d expect when compared with air frying wings. 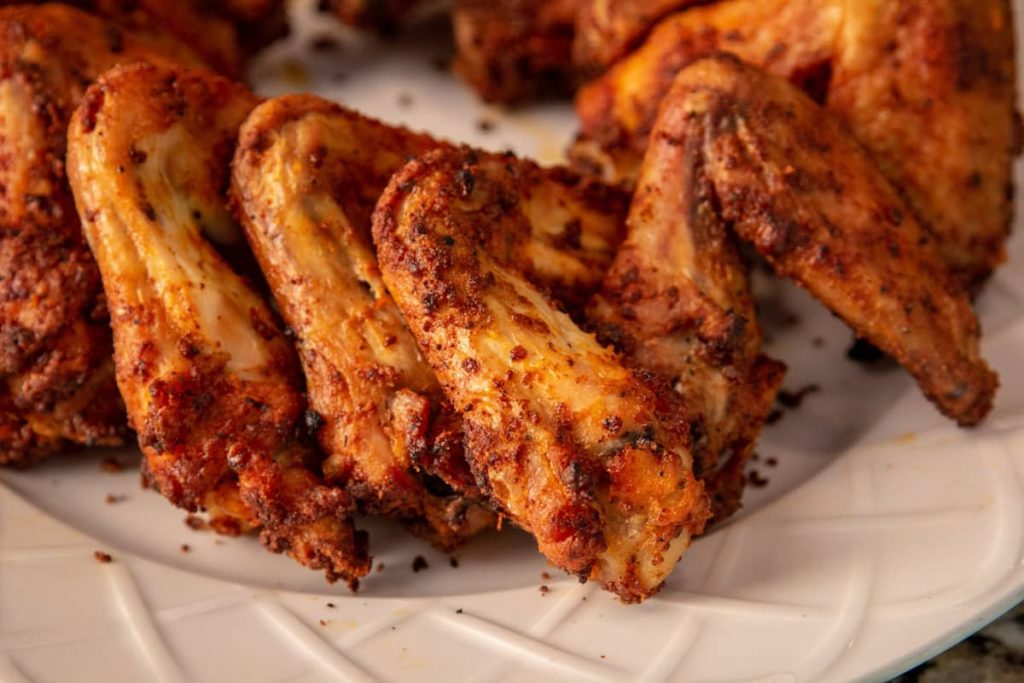 We know that baking isn’t as quick or as crispy as air frying, but it’s the only other method to cook frozen chicken wings straight out of the freezer with a somewhat crispy finish. It will also take longer than air frying, but if you have a regular oven at least you won’t have to spend any more money.

Here is how you bake uncooked and pre-cooked frozen chicken wings.

Remove the chicken from the freezer and prepare any seasonings or other ingredients. Preheat the oven to 400°F, while it is heating lightly oil all of the chicken wings and spread them out onto a flat tray that has been sprayed with a non-stick cooking spray. Make sure to put the chicken wings a good distance from each other and lay them as flat as possible.

Once done preheating, put the tray of chicken wings into the oven and cook for about 25 – 30 minutes. Be sure to flip the chicken once the top side is already browned to ensure an even crisp. The time can vary depending on how thick the chicken wings are.

Again as long as the inside of the largest wing is fully cooked, it’s fine. Once done, take the tray out of the oven and let it cool down a bit, then you can put your sauce on it and you’re done. Now you have a delicious tray full of baked chicken wings.

Much like the air-fried ones, you will again take them out of the oven and prepare them with seasonings and whatnot. Preheat the oven to 400°F, while it is doing this, coat all the chicken wings in some oil.

Before putting the chicken wings on the tray, put a thin layer of non-stick cooking spray on the tray. Pop the chicken wings into the oven and cook for about 10 – 12 minutes, again make sure that the biggest chicken wing is cooked all the way through. And while doing that, be sure to flip the chicken while cooking to ensure an even crisp of the skin. After taking them out of the oven, just wait a bit and then bring out the sauce to eat your baked chicken wings.

From the instructions, you can tell there is quite a bit more preparation and it takes a bit longer to bake frozen chicken wings than to air fry them. There still is a bit of an advantage to doing it this way, as although less crispy the skin will taste more like you’re probably used to. Since the air fryer’s frying will give the chicken skin a slightly unusual kind of crispness, at that point though it’s up to you if you’re fine with that or even prefer it over a more traditional fried chicken skin taste. 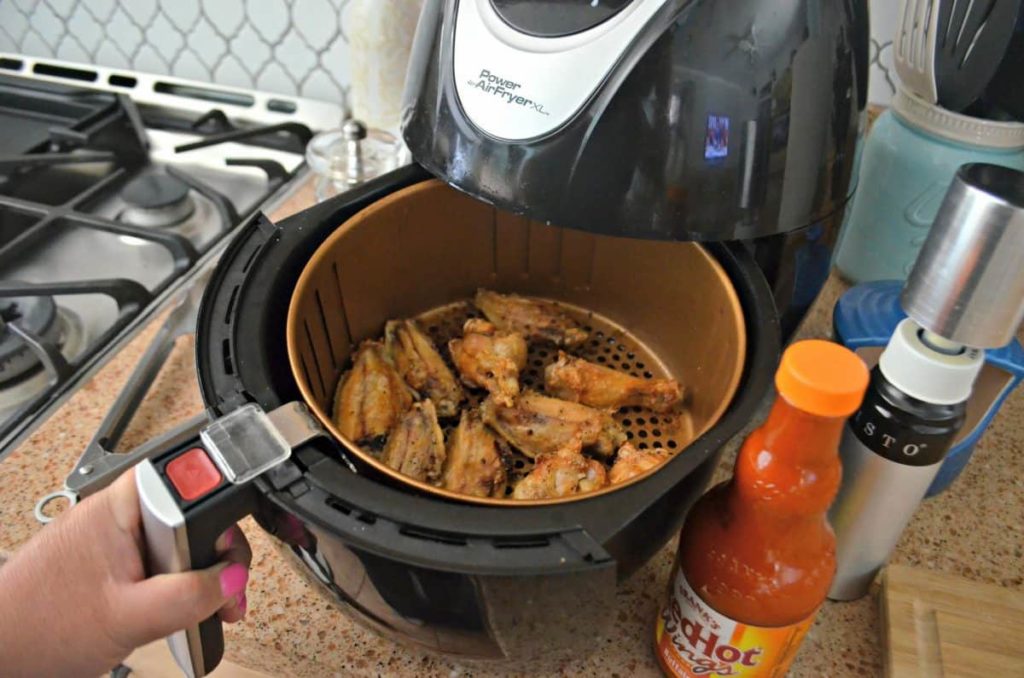 Now that we’ve gone over a simple way to prepare frozen chicken wings with both methods, the benefits of air frying are obvious. Besides it being generally quicker, there is also less preparation as you don’t have to worry about the chicken wings sticking to any surfaces in an air fryer.

There is also how when working with frozen chicken wings they aren’t particularly juicy coming out so you’d want to eat it with a sauce anyways. This is a plus as air fryers do sort of lack in that department of making different meats juice up, but in this scenario, it doesn’t really matter. There is also the fact that it is much easier to clean up after using an air fryer as not only are there fewer oily ingredients used but the amount of area to clean is also just less.

Plus the only real downside to air frying is the slight difference in taste with the skin compared to the usual methods of preparing chicken. But that is something that can be put down to personal preference as you might not mind. And as that is pretty much the only competition, as frying frozen chicken any other way is a bad idea, it wins this 1v1.

CBD For Dogs: What You Need to Know

How To Enjoy New York-Style Pizzas With Your Friends 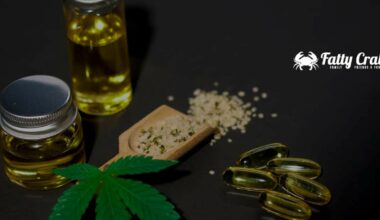 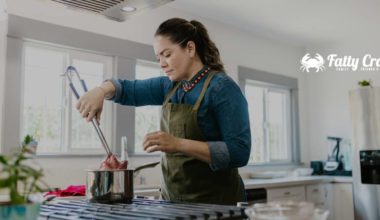 Read More
Table of Contents Hide 1. Find a Good Recipe2. Get the Right Ingredients3. Follow the Instructions4. Don’t Be…
CCookware 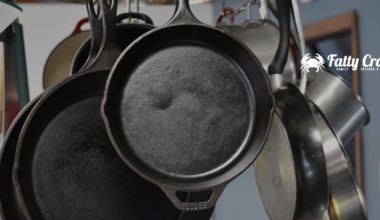