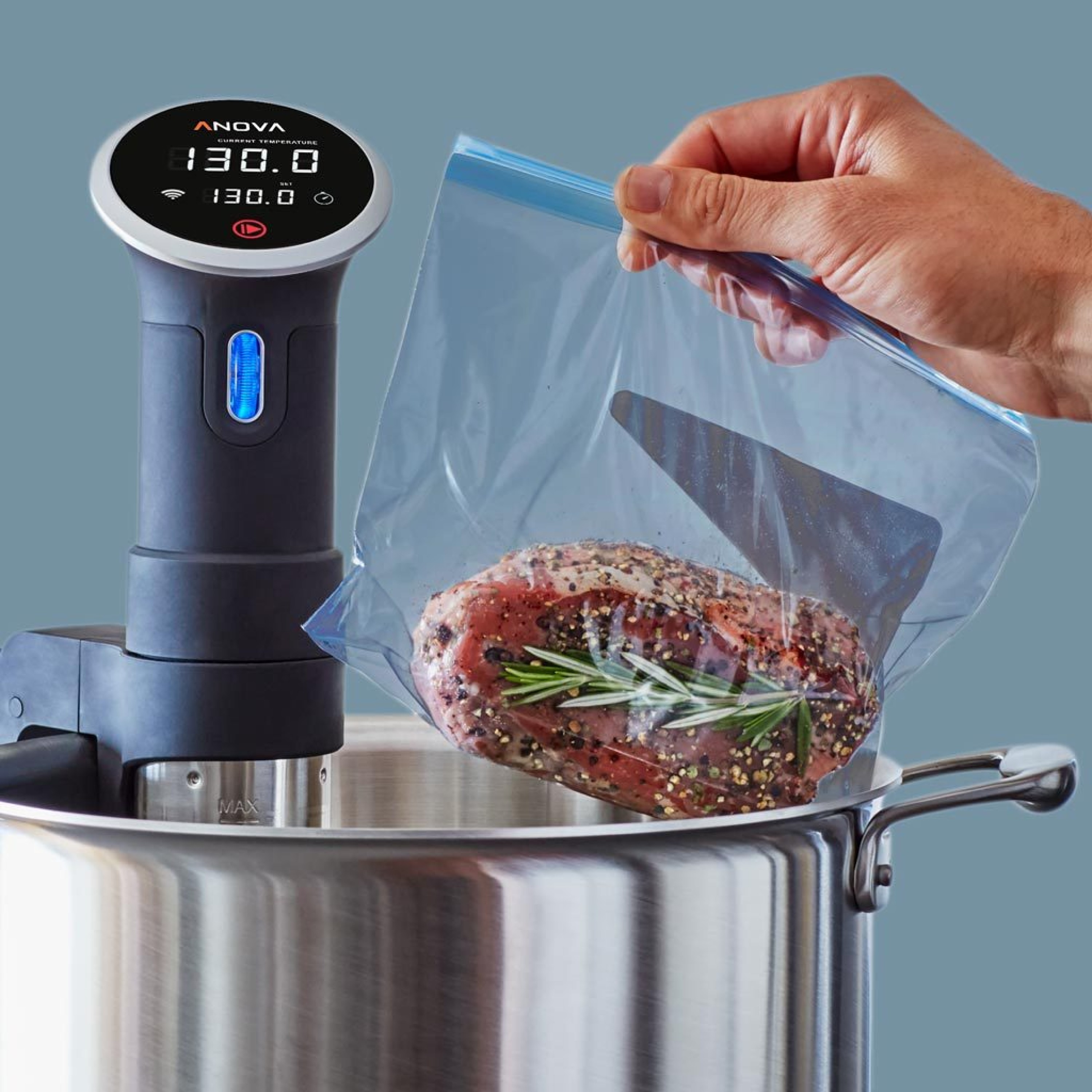 What is The Best Sous Vide Immersion Circulator?

Sous Vide is a French term for describing a cooking method of cooking food in a water bath. Food is placed inside a vacuum-sealed bag, where it cooks in its own natural juices along with whatever spices you choose to add. Meat is the #1 item cooks use a Sous Vide Immersion Circulator for but vegetables can also be made and since you aren’t exposing the veggies to water they retain all their nourishment. The end result is a delicious meal that’s tender and rich in flavor, and that’s never overcooked.

You do not need to buy an expensive Sous Vide Immersion Circulator, quite the contrary, most home cooks will fall in love with their machines that may cost less than $100 like the Anova Nano. The Chef Steps Joule is probably the best mid level Immersion Circulator and the newly released Anova Pro gets our high end top pick recommendation.

We’ll start the list with our at home immersion circulator that we recommend most often for at home use, the Anova 900 immersion cooker is user-friendly and prouces simply delicious meals. To get started, you simply attach the unit to any pot or bucket . You can then use the Anova app or the interface on the immersion circulator itself to set the desired cooking time and temperature. Place your food in a vacuum sealed plastic bag and submerge it in the water bath. The immersion circulator will then cook your food evenly and thoroughly by circulating water around the pot. The app and WiFi connectivity lets you cook or schedule a meal even when you’re not at home. This unit has 900 watts of power and a pump speed of 2.4 gallons per minute. There is also a water direction feature at the bottom of the Anova 900 Immersion Circulator  that allows you to control the direction of the water so that food wont get caught in a corner of your pot.

Cooking with Chefsteps Joule is very easy, even if you are brand new to using an immersion circulatorg. To start, add water to your pot and choose your preferred cooking temperature via the app. Like all Sous Vide cookers the next step is to place your food in a vacuum sealed plastic bag and place it under the water. Despite its compact size, the Chefsteps Joule immersion circulator is equipped with a powerful heater so that water heats up quickly. In addition to a built-in clip to secure it to the side of a pot, the immersion cooker also comes with a magnet to help it stand independently in stainless steel pots. Normally I use a plastic bucket so the magnet doesn’t help but it is a great item to have if you are using stainless stell pots. It works with Iphone or Android phones and connects via Bluetooth. It is extremely precse to within .2 degrees farenheit.

The Wancle immersion circulator covers all the basics and is a great entry level Sous Vide cooker, with 850 watts of cooking power it fits in nicely between the Anova Nano and the Anova 900. It has a digital timer so no app to deal with. It has an attractive stainless steel finish. Unlike many of its competitors, this unit offers a pretty wide temperature range so you can make lots of different dishes.

Anova’s entry evel machine is the Anova Nano, it is priced less than $100 and shows why the company remains the top selling Immersion Cooker manufactuer. It’s easy to use and is very precise. If you’re looking for a entry level sous vide immersion circulator, the Anova Nano is the one to get. The all-black Nano looks sleeker than the original Anova, too. For one, the clamp used to secure it to a pot or container is smaller and  integrated into the unit; on the original, the entire clamp was removable. The effect is that the body of the Nano is an uninterrupted cylinder.

Designed for commercial use the Anova Pro would make a top of the line home model for those wanting the best of the best. It’s made of aluminum and stainless steel and has a strong Teflon coating. Anova says it holds up to IPX-7 durability ratings, which included kitchen-friendly drop testing (always a good thing), and there is also a solid 2 year warranty on the Anova Pro. It cooks large meals to perfection with its 1200 watts of power.

You’ve probably already decided you want to buy an immersion circulator and try cooking your food sous vide style, or else you wouldn’t be here! We’ve recommended what we believe are the best sous vide immersion circulators available for their price, durabilty, precision and ease of use. For most people the decision will come down to price. The Wancle and Anova Nano are the best entry level machines under $100. The Anova 900 and the Chefsteps Joule are superb machines for home use and if you want the best of the best then there is the Anova Pro.

Sous vide cooking relies on precise temperatures to lock the flavor in and cook the food evenly throughout. It’s main advantage that few talk about is that it is really so simple to do. All it takes is setting the temperature on your app or immersion circulator and placing the food in the water bath. Follow those instructions and you’ll come out with perfectly cooked food. Seriously, it’salmost impossible to screw up!

The list of the top 5 Sous Vide Immersion Circulators

Be sure to shop at the Fatty Crab: https://www.fattycrab.com/